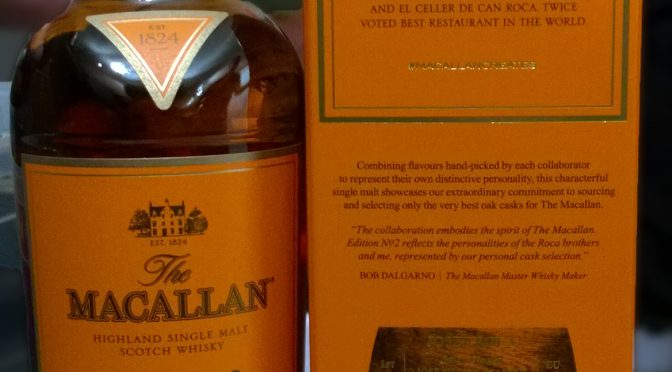 Whenever I hear we are going to be tasting a Macallan, my taste buds light up. This time around we were graced with two bottles of which I had not heard of.  After a previous sampling of the Macallan Gold, I became a bit hesitant to immediately fall in love with anything that was not a standard aged bottle (i.e.: Macallan 18, my personal favourite).  First up, Edition No 2.

This dram had a wonderful dark caramel colour and on the glass showed some LONG legs.  Brought to the nose, slowly albeit, I was hit with a very strong fragrance specifically caramel and spices.  Preparation for a strong taste ensued.
Well, on the initial taste it felt like it broke apart into a million pieces and left with what felt like no flavour.  A second later all those pieces felt like they themselves exploded into millions more pieces, but this time with a typical warmth I expect from a Macallan.  The colour and nose look and feel continued into the flavour.  Sweet, chocolatey caramel flavours that built on each other the further down it went.  The warmth lingered on for quite a while and just begged for another sip.
For a $175 (CDN) bottle I was very impressed and would definitely look at adding this to the collection.  The only thing that would hold me back is the initial drink of this as it almost felt watery when it hit the tongue.  But as it continued, my wallet started to open up.