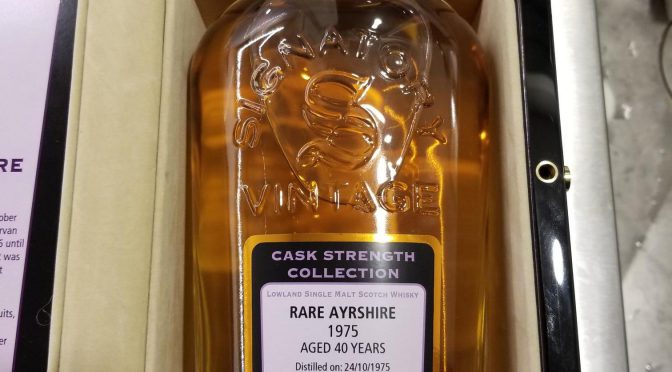 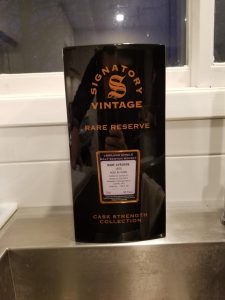 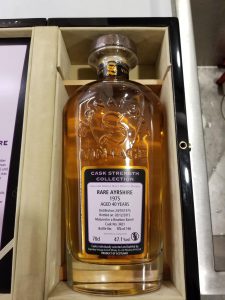 When I was given the opportunity by the Executive Board to select and purchase a very special bottle of whisky for the Club’s 10 Year Anniversary, I was both excited and wary. To spend a budget of $1500 of the Members’ hard earned money on a single bottle was a big responsibility, but also a rare treat. I was afforded this task as I was planning a trip to Scotland, where an entire world of whisky would be available to choose from, versus the maddeningly limited selections consistently put forth by the uninspired LCBO. I took my assignment seriously and put a full-on nerdy amount of time into researching the purchase. I thought this was the hard part. What ended up being much harder was the year that passed while the carefully selected bottle sat on my shelf, sealed and unsullied, waiting for the Big Day of January 27, 2018 to arrive. Paranoia set in: What if something was “off” about the bottle? What if the seal was compromised? What if that beautifully packaged whisky just plain sucked?

Rare Ayrshire is close to my heart, not only because of the work that went into selecting it over hundreds of other unique and interesting options available in Scotland, but also because of the journey. Procuring it and safely transporting it home was part of my trip to a country that I enjoyed immensely.

The worst moment of my trip sadly was an experience I had that was directly related to my mission to acquire Rare Ayrshire, at a distillery I was dying to see, Edradour, the smallest in the country and distiller of some of my personal favorite and hard-to-find-in-Ontario whiskies. Edradour is home to the bottling processes of Signatory Vintage, a company that has been collecting rare barrels from around Scotland since 1988. Signatory Vintage bottles its carefully curated selection of spirits under its own banner and credits the original distiller on the label. Its bottles are packaged beautifully and fetch significant sums as the company boasts one of the most unique collections of whisky in the world. Most Signatory Vintage bottles are extremely rare.

Signatory Vintage bottled our Rare Ayrshire, which was distilled in 1975 by a now-closed facility called Ladyburn Distillery, an expansion of the still-operating Girvan Distillery owned by Grant and Sons (owners of brands such as Glenfiddich, Balvenie and Tullamore). What an opportunity for our Club!: to taste a rare whisky that is not only 40 years old, but is also a tiny piece of the spirit’s proud history that will never be even close to replicated. Ladyburn was demolished in 1976, after only 2 bottlings of its Ayrshire whisky under its own name and label.

Upon departing for Scotland, I knew that two bottles of Rare Ayrshire were within my reach given the areas I planned to visit. The first of the 2 was housed at Edradour, in an exit-through-the-gift-shop style collection of many, many special bottles. As it turns out, Edradour was the most pretentious and unwelcoming place that I visited in Scotland. It was really the only place in the country I could describe this way. They have crazy cool whisky available, and they know it. 1975 Rare Ayrshire, in the exact same packaging, was priced at $800 USD higher than at the private seller I eventually purchased the bottle from in the central Highlands. The price was mad and the kilt-wearing skinny old (totally not Scottish) man that “helped” me while I was in the Edradour whisky shop was a total prick.

Rare Ayrshire is everything that Edradour was not. There is no pretention to this beautiful, smooth, golden-straw coloured gift from the glens of the coastal lowlands. There is nothing flashy about the whisky itself – no crazy flavours or twists like many of the punch-you-in-face styles the Club has tried. It is just lovely and mellow. You could taste the patience of the 40 years it spent in its bourbon barrel.

Rare Ayrshire boasted no mucky seaweed or mossy birch bark or leathery old shoes. It is not a peated whisky, despite its heritage of being from a region known for its bogs. There is a creaminess to it, with lots of fruit. I am not super-skilled at calling fruit for what it is when tasting, and I can’t lie, I did not get pineapple as suggested by some tasting notes online, but I did get the feeling of an orchard – only a touch more exotic. There was a delicate sweetness to it that turned somehow nutty. Despite its mellow approach, Rare Ayrshire was truly complex – the type of whisky that you could gladly try over and over again and always discover something new.

Alas though, she is a limited gift, with very little more to be found out there, as evidenced by its now-increased price to at least $1800 USD per bottle (our price: $1495 CAN). Note that I also found what I believe was an authentic Ladyburn-labelled bottle of 1975 Rare Ayrshire during my travels in Scotland, which was selling for a whopping $4500 CAN.

Here are a few more of my tasting notes, along with what better-honourary-Scots-than-I have found in my unicorn of whiskies:

Thanks to the boys for this awesome opportunity. I’m sure I will hear the wind whispering her name for many years to come.