This was one of the samples we had on our guided tasting with Jamison’s Irish Whiskey. It was by far the youngest and lightest in colour compared to everything else we had this evening. Distillers safe is a tribute to Jamison’s head distiller Brian Nation, and the tool of his craft, which is a spirit safe. You can find out what a spirit safe is here. https://en.wikipedia.org/wiki/Spirit_safe 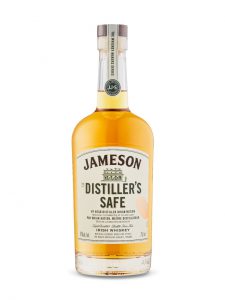 When you taste whiskey that has matured in casks, it really is something. You have the flavour of an alternate liquid (usually sherry or bourbon) that seasoned the barrel. The barrel itself is either European or American oak, and than it is toasted to varying levels. All of these combine to overwhelm the senses when that bottle is uncorked and pored into a glass. The aroma, the mouth feel, the smoothness and flavour all work in harmony and balance. All of this was pre conceived years, if not decades before coming to this single moment of fruition. Distillers safe had some of these characteristics, an amazing feat considering it is only 4 years old, and just incase your wondering, it takes 3 years to officially become whiskey.

The nose on this was fruity and sweet. I could detect grapefruit, among the fruits, and should be noted was extremely light in colour. The palate was light, silky, zesty, and finished quickly. Of all the tasters Jameson’s brought with them, this one was my least favourite. I found this to be to light in every aspect. Light on the nose, light on the taste, and light on the finish. Nothing surprised me during this experience, It tasted exactly how it smelled, and finished with a quiet whisper.

To me, good whiskey needs a balance that I did not find here. I do recommend trying this one as I find it interesting that being only 4 years old to have the characteristics it did. I’m sure much if not all of those came from the ingredients that Brian decided to distil. Jameson’s line of whiskeys pair well with pickles or anything salty, as would be the case with this. I would also make my own recommendation and pair this with a zesty shrimp salad, arugula, green onion, garlic, lime, cilantro, and kimchi, would balance the sweet and the salty to pair nicely.

Although this was not my favourite, it is by far not the worst I have ever tried. Brian should be commended for making something so unique out of something so young. His skill as a distiller shines in this bottle. I will skip this one for my personal collection, but if you ever have a chance to try this, don’t pass this one up. 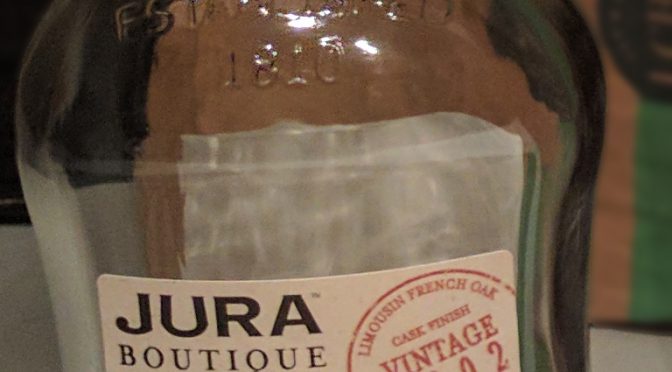 I was excited to try this from the beginning of our meeting. Let’s get the first part of this review finished quickly so we can get to the tasting……. The pleasantly golden amber, blah, blah, blah. Sparkled ever so subtle in the right light, blah, blah, blah. And so on. Now that all that garbage is out off the way, lets begin.

The nose immediately punched me like a heavyweight prize fighter. Despite my best efforts to hide it, I’m sure anyone watching me noticed my head swivel back and to the side as if actually hit by that haymaker punch. Again, but more slowly, and with a degree of caution I didn’t know before, I brought my nose close to the glass. Strong heat, with just a touch of smoke as if someone were barbecuing in the neighbourhood, but you couldn’t tell from where. This had all the characteristics of burning all the way down like drinking pure hot sauce.

What did I get myself into? This, the loudest of my many regretful thoughts going through my mind as I prepared to drink and pulled the glass closer. Initially my gut was telling me I was right. This started to burn with no sign of stopping, making me regret not having any heartburn medication on me. I was not prepared for a sleepless night of tossing and turning. But I was wrong. All of a sudden this opened instantly like someone threw open very heavy and thick blinds in a dark, black painted room, allowing the sunlight to rush in. New flavours started to come to light. Dry spice, fresh ground pepper, clove, waxy smoke, oak, and a sweetness, maybe slight cinnamon. What I once thought was pungent on the nose, turned and became pleasant. How could I have been so wrong?

I was a little braver with my next sip and held it on my tongue. My tongue immediately went fuzzy as if covered in thick fur. But the flavour was worth it. Strong waxy smoke, if there is such a thing, and a slight sweetness. I wanted to try this with a drop of water to see how the profile changed. Although quite tasty, but much better without the water. Drink this one neat.

Never judge a book by its colour is what I was taught, but tonight, this whiskey taught me another lesson. Never judge a whiskey no matter how repulsive that first nose is. This would pair well with sweet fruit like pear. In fact this would be a perfect sipping whiskey for an antipasti platter. Nice stinky blue, or stilton cheese, spicy, salty, and fatty cured meats, bitter olive, sweet pear or grape, crostini, and a smoky dram of Jura.

The nose of this scotch came of quite sweet as notes of caramel and toffee competed for dominance. As my nose drifted closer and closer to this pleasantly coloured taster, I started to detect vanilla, nuts and fruit.

With anticipation I went in for a taste. My nose was correct and tasted very much like sweet caramel, almost too sweet, but wait what’s this, a little bit of an oak flavor to round out and balance the sweetness comes into play. These flavors danced a great duet on my tongue, always flirting on the edge of overpowering, than fading as the other took the lead. When the duet finished all too soon, curtains refused to fall on the performance. The flavour lingered as my taste buds cheered, and I found myself begging for an encore. To my delight, I looked down to see a tiny bit left in my glass and thought to myself with excitement, as I greedily drank what I should have rationed better, as to what dance will I experience this time.

Obviously I thoroughly enjoyed this Scotch. Although I did find a balance, initially it is rather sweet leading me to believe 2 glasses would be plenty for me before overload. This would pair nice with any savory dessert, such as a panna cotta with foie gras. This would be a nice bottle for any collector to put into their collection.

The nose on this was slightly malty. I could detect honey, oak and maybe dried fruit. As I brought the glass closer this did not change, it just intensified. As I took my first sip, I was hit with the dry fruit element, waxy honey, and a strong oak.

As this rolled over my tongue, it started to mellow and I could slightly detect an orange component that surprised me as there was no hint of citrus until now. I found this scotch finished clean, a good one to sip on a summer patio all evening long. This scotch would pair well with seafood, or Mexican dishes as I think the sweetness from the fruit and honey would benefit from a spicy component that I did not find present in my glass.

Overall I enjoyed this scotch. At a $100 a bottle I do feel there are better choices for that price point. If you find an opportunity to taste this it’s definitely worth a try, but I will pass this one over when it comes to my personal collection.